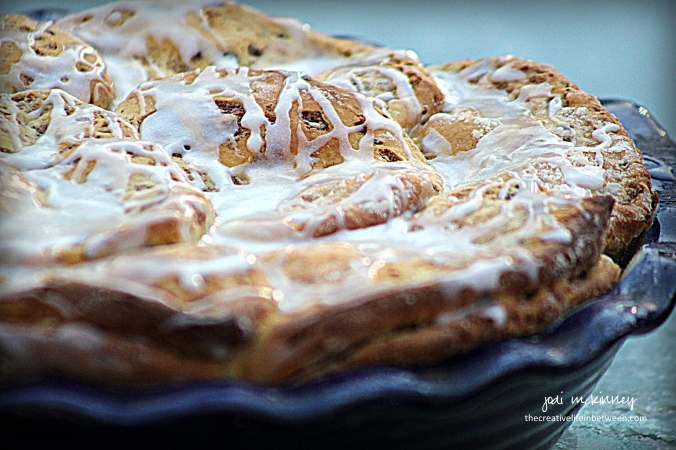 When my sister-in-law posted one of those amazing Tasty Videos on Facebook for a Cinnamon Roll Apple Pie, I just knew I HAD to try it!

We love apple pie.  We love cinnamon rolls.  Who doesn’t??!!  Putting them together to make an EASY apple pie = Winner!

If you struggle with making homemade crust or are looking for a new twist on traditional apple pie, this is an easy and super yummy semi-homemade version to try.

I made it for a birthday brunch yesterday when the family came over to celebrate hubby’s upcoming birthday.  After gorging ourselves on smoked sausages (that hubby smoked himself in his Pit Barrel Cooker we got him this past Father’s Day), Spinach, Feta, Bacon & Roasted Red Pepper Egg Casserole, Warm Biscuits and Sausage Gravy (homemade by our oldest son), and a fresh berry fruit salad, we waited a little while before eating this.  But when we did….. thumbs up all around!

I tweaked the recipe up a bit to assure the apples would be fully cooked without overbaking and drying out the cinnamon rolls.  It turned out wonderfully amazing!  And the smell……..  can you even imagine the wonderful smell?!?!

Hope you will give this delicious treat a try.  (Thanks for sharing Terri!)

Roll out each cinnamon roll in one tube until flat and thin using a small amount of flour to avoid sticking to rolling pin and counter.  Layer on the bottom and up sides of pie pan to form bottom crust.  Add the cooked apples.

Roll out each cinnamon roll in second tube until flat and thin, and layer on top of apples to form top crust.

Allow pie to cool and drizzle with icing from one tube of cinnamon rolls.